I have had Tower Bridge (10214-1) for several months now and been generally quite impressed with the build in general as well as the value, given this I thought it would be nice to get some more of the collectors sets. I happened to see that the Imperial Shuttle (10212-1) was down to £200 (down from £250) in the Lego May 4th Star Wars sale and I had been admiring it for some time so I gave in and bought it.

Looking at the reviews beforehand I was rather sceptical of the “challenging construction” that reviews had claimed in this model, the same had been claimed of Tower Bridge and I had found it reasonably easy, putting it together in about 3.5 hours, which I guess isn’t bad for 4287 pieces. The reviews also complained that the wings were fragile and that the landing gear had to be removed while the model was on its display stand; neither of these things particularly bothered me since I wasn’t planning to use the model for play and “swooshability” wasn’t much of an issue.

Despite claims from Lego that it would be late, due to the popularity of the sale, the set arrived in the post on Saturday and I opened the set claiming that I would be finished by 3am. Due to the sale I got a free poster of the new Ultimate Collector Series R2-D2 (which I’m not keen on, I don’t think that they did the rounded body very well), a micro scale TIE fighter, and a E-3PO (silver version of C-3PO); I disregarded all of these, eager to get on with the build.

One of the first things I noticed on opening the set was that, although there are 4 instruction booklets, the pieces all come in bags sorted by type rather than according to which set of instructions you needed them for (unlike Tower Bridge and the Medieval Market Village). Due to this I spread all of the pieces out on the floor and relied on searching the old fashioned way (I almost always build on the floor due to childhood habits, though my knees are getting a bit old for it now).

I ran into a hitch on the first few instructions due to mistaking dark grey for black in the instructions; I thought that Lego had taken to outlining pieces that were black in white to prevent confusion but they were pretty indistinguishable for this set. I de-constructed the model I had so far when I realised that there weren’t any of the pieces I needed in black and rebuilt it using dark grey.

I was struck fairly soon by just how complicated the model was, the build starts you off by building the main body of the shuttle and the mechanism for winding the wings up and down, some of the steps were fairly fiddly and required you to balance a piece of Technic while you slotted a rod into place. I realised about this point that the reviews had been justified in calling this a challenging build. 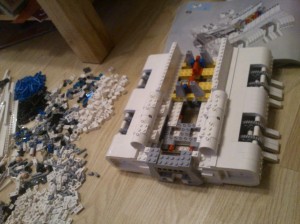 As can be seen above there is a reasonably complex interior to the body of the shuttle, both for the wing mechanism and to keep the structure from falling apart.  The vertical wing slots into the red Technic pieces that can be seen at the rear of the model.

I realised now just how large the model was going to be, the pictured part was around 250mm across and, by my reckoning, there would be at least that again on either side for the side wings.

The vertical wing is the first to be constructed, using the new style Technic beams (the ones without studs on top) for structural stability and using various types of pegs to hold a standard bricks in place.  The whole construction is then slotted into the top of the body of the shuttle.

Continuing to build up the wings confirmed to me that this model is absolutely huge, when I slotted the vertical wing into place it bested the height of my coffee table which isn’t exactly small: 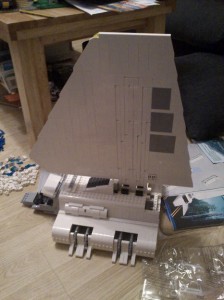 The side wings are constructed similarly to the vertical, but with more fiddly bits, some of the first pieces have to be balanced for several instructions until they are held in place securely.  Apart from being fiddly the wings are reasonably standard to make, although you do have to follow mirrored instructions for each which, although I didn’t mind, might discourage some builders.

I was quite worried about how strong the wing connections would be since the wings are quite big and connected wholly in the space of three studs but they seem to hold ok.  The cogs to adjust the wings seemed to slip a little before I had put all the pegs in but afterwards they worked fine.

After the wings are connected you build various guns around the shuttle and the display stand.  It turned out that at some point in the build I had once again mistaken dark grey for black in the instructions and so I had a 1x4 plate that was the wrong colour that I needed to use in the display stand.  Given that it was at this point about 4:30am I couldn’t bear the thought of tearing the shuttle apart to find the rogue black piece so I just used the dark grey one in the display stand; at least it wasn’t too obvious. 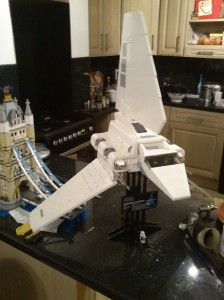 I finally finished construction at around 5am and moved the shuttle to the kitchen bench before heading to bed.

All in all I thought it was a pretty enjoyable build.  The instructions could use a little clarification and I won’t underestimate a set like this again, the total build time was about 5 hours (for 2503 pieces) compared to Tower Bridge (about 3.5 hours for 4287 pieces).  The set is huge, it can be seen above towering over Tower Bridge.  I would definitely recommend it to advanced builders if you want something challenging, great value for money in terms of build time.