Yep, I’m starting up my blog again with news from me at uni.

Warwick is pretty cool so far, work is pretty good and at a level where you can do pretty much as much or as little as you like, though naturally you need to do more for decent grades.

I’ve joined waaaay to many societies and sports clubs:

Juggling is really fun, despite my crappiness at juggling, I tend to do diabolo or poi there instead.
There was a society trip to Leeds yesterday to a juggling convention which was awesome, especially the shows at the end. Thoguh I did somehow manage to spend a ridiculous ammount of money on a new diabolo and poi, though they’re pretty nice and should do me for a while.

Also heres a picture of me doing poi at 3 in the morning on top of a 12 foot sculpture wearing a toga…. don’t ask. 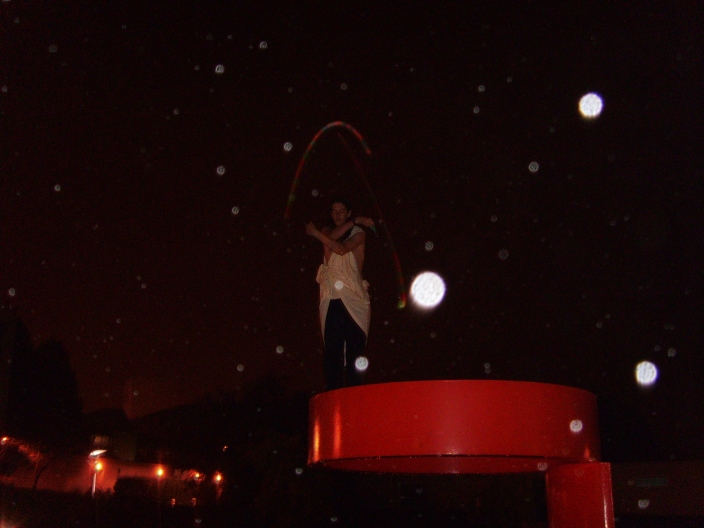 Sci Fi club, however geeky it may be is pretty fun too, as the name suggests it is mainly to do with sci fi, but it isn’t actually movies rather than board games and pen and paper role playing games.

Climbing is great fun especially since theres an awesome wall in our sports centre, which at £40 for the year is pretty good.

Computing, or compsoc as its known is another geeky one, also fun, though I haven’t been along to many of their events, the exception being their 49 hour LAN party (note I didn’t stay in there the entire 49 hours like some did).

Mountaineering is good in that it gets me out walking some more (since my last post I’ve done barely any walking and I was disgraced the other day to find that me feet were aching after a 15 mile walk), there was a trip to Snowdonia two weeks ago which was great fun, we did some nice walks and scrambles as well as a lot of table traversing (climbing over and under tables without touching the floor) in the evenings. There is another trip, this time to Ambleside (in the lake district), next weekend which I am looking foreward to imensely.

Video Game Design is just what it sounds like, and also gives me an excuse to pla my DS with otuer people from time to time.

Assassin’s Guild is rather odd and apparently originated in Cambridge. Basically you sign up to a game over a few weeks, you get given a target who is someone else who has signed up, and you have to kill them in a novel way i.e. dropping a (polystyrene) fridge on their head, shooting them with a water pistol or setting up elaborate water traps. Unfortunatley I ahven;t managed to sign up for any games of this yet, but it should be fun.

Snow Sports is mostly a reason to go skiing, though they do a lot of socials too, I didn’t make it into the Christmas trip to France, but I’m probalby going somewhere with Warwick Mountains instead anyhow.

Student Cinema is what it sounds like, they take over a huge lecture theatre and then project a film every night. So far I’ve been too busy with work and other societies to go and see anything but I’m hoping to go and see Brick (an awesome film) late tonight after our lamb roast.

Well, thats what I’ve been up to since I got to Uni, more details will probably follow.